Circumplex Models in Recruiting: Part I (The Blenders)

The image you are looking at is an abstract rendering of what is called a “circumplex model”, a term coined in 1954, by Professor Louis Guttman, creator of the “Guttman Scale”, widely used in statistical surveys.

The circumplex model—a system of variables that have a circular law of order—has  numerous applications in personality and personnel assessment and is a powerful analytical tool that, in its most common forms, represents the relationships among “opposites”, such as “high arousal-low arousal” mapped against another pair of opposites, such as “pleasure-displeasure”.

These models take two forms, with data that either

1.       Lie on a cyclical continuum, discretely or gradually transitioning into the next, as the eye moves along the rim of the wheel clockwise or counterclockwise, in the way that the signs of the zodiac, the colors of the “color wheel” (figure 1), or the ascending notes of a musical scale do.

An example of a blending circumplex model is the very popular “Circumplex Model of Emotions”, designed by Robert Plutchik, and which represents complex emotions as blends of eight primary emotions (joy versus sadness; anger versus fear; trust versus disgust; and surprise versus anticipation).  In this scheme, optimism is a blend of anticipation and joy; while despair is a blend of fear and sadness.

Blending models are the form of circumplex modeling most commonly used in personality and personnel assessment, often with the “bulls-eye”, where the axes intersect, representing healthy or normal balance. As will be noted below, in various instances, data points are found in the interior of the circle and not just on the rim, unlike the item representations in zodiac or piano-note rim-based circumplex models.

The “high arousal-low arousal” (X) and “pleasure-displeasure” (Y)  model of Russell, Watson and Tellegen, alluded to above, is another example of a non-cyclic, blending circumplex model. For example, in that model, anxiety represents a blend of “high arousal” and “displeasure”.

Among other psychological applications of circumplex modeling, with implications for candidate profiling and selection are these:

The 12-month calendar or the zodiac is perhaps the simplest example of a true cycle (plus blending) circumplex model, the familiar “color wheel” (figure 1)  being a second, since, in both, the components on the rim blend into each other as the circumference is traversed. (Because of monitor variations in color display, the color wheel shown is a stylized adaptation whose display is not intended to correspond to “official” color wheels). 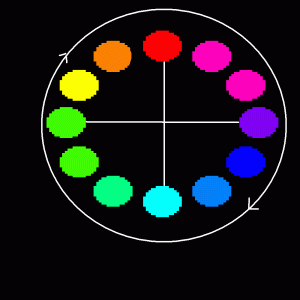 The white keys on a piano keyboard provide a circumplex of sorts: C-D-E-F-G-A-B-C-D-E-F….etc., as one proceeds up the  the piano keyboard, although each repeated note is at a higher frequency. Note that since these notes are discrete, there is blending, but only approximately: “C” and “D” are indeed not so different and do lead on to the next notes in the circle; however, unlike a fretless bass or sitar, a piano cannot sound another note between every two adjacent notes. Piano: discrete; sitar: analog.

As for the color circumplex, notice how in the “additive color” mixing diagram, figure 2, shown here the sequence of colors can be traced as a wheel that corresponds to the the wheel shown.

What is special about this kind of color mixing is that, unlike the 4-quadrant zodiac model, with four groups of 3 signs each, e.g., Aquarius, Pisces, Aries, and many of the psychological models, e.g., those based on Jung’s “intravert-extravert”, “thinking-feeling”, “judging-perceiving”, “intuition-sensing” dichotomies, the number of “opposites”, i.e., the primary colors, is odd— three in number for humans, namely, red, green and blue, in this model. However, some species of  birds and marsupials have four primary color channels and cones (are “tetrachromats”, unlike humans, who are “trichromats”), which precisely matches the 4-quadrant model of the circumplex image at the top of this page.

The Intriguing Thing About Circumplex Models

The most remarkable, if not miraculous, thing about cyclical circumplex models and wheels is that wherever you start on them and proceed to move along the rim in one direction, you end up where you started, even though the underlying variable(s) that create the circle are in many instances continuously increasing (or decreasing), e.g., you will climb to another “C’ on the piano, even though the sound wave frequencies continuously increase.  Others, like the zodiac, are completely unmysterious and merely reflect naturally occurring cycles that easily map into circles analogous to the revolutions and rotations of celestial bodies and cycle of the seasons.

The “blender”, non-cyclical models are fascinating in their own way, to the extent that what appear to be and are experienced as totally independent categories of things, such as emotions, are related to each other in ways closely analogous to the ways in which colors that also seem to be independent of each other are actually blends of primary colors.

A Blender-Circumplex Application to Candidate Placement

What makes these kinds of blender models useful to recruiters is that they provide tools for analyzing the components of candidate emotions, moods, attitudes, talents, interests and vocational suitability, etc. For example, utilizing the “Personal Globe Inventory-Circumplex”, created by T.J.G. Tracey (figure 3), the kinds of occupations most likely to suit or interest a given applicant can be mapped and inferred from a circumplex blending model with “people”, “ideas”, “things” and “data” as the four polarities representing what people are most interested in.

This means that the “artistic” type can be analyzed as a blend of “people-person” and “idea-person”. (Note that in this model the “opposition” dichotomies are not so clear-cut, e.g., “data” vs. “ideas” (—why not “feelings” vs. “ideas”?) and in competition with the model a factory foreman spelled out to me on one of our shifts during my teen years, when he told me that there are three kinds of people:  those interested in “people, ideas or events”.)

In the second sub-model, things get more complicated, if data points can fall within the area of the circle, say, somewhere in the middle of the “people-ideas” quadrant. This area-based model will, of course, allow for much finer discriminations among candidates.

Since the applications cited have all been non-cyclical, the natural question to ask at this juncture is, “Are there cyclical circumplex models, akin to the zodiac, but more ‘scientific’ —with or without blending (such as the discrete notes on a piano that never blend)—that apply to recruiting?”

For the answer to that, you’ll have to wait for “Part II (The Cyclers)” to be blended with this initial discussion, “Part I  (The Blenders)”, in another publication cycle here at Recruiter.com.